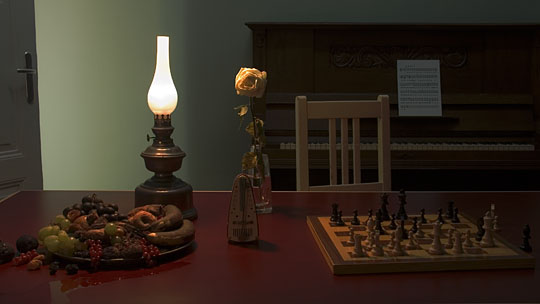 The video shows a "moving still life" in photographic resolution. It is presented on a wall mounted flat panel display.

On a table in the foreground one sees a plate with fruits, an oil lamp, a metronome, a vase with a white rose and a game of chess. In the background there is a chair and a piano. The image is captured by a camera that very slowly turns around this setting. During the duration of the seven and a half minute video, the metronome beats on the second, while the fruits decay and the rose dries up. At some point a chess figure starts moving across the board.

In the video several contradicting levels of time are shown at once. It is the result of a computer controlled setting being photographed over the period of many weeks.

The work is inspired by Johann Nepomuk Maelzel, an inventor and constructor living at the beginning of the 19th century, who worked on creating illusions by means of technology. He was considered the inventor of the metronome and constructed spectacular musical automats, for which composers like Ludwig van Beethoven wrote pieces of music. After the death of the constructor Wolfgang von Kempelen, Maelzel gained possession of his “chess turk”, a chess playing machine, that Maelzel had compete against the likes of Napoleon. Later he travelled to France, England and the US with his “mechanical exhibition”, where a famous article by the then journalist Edgar Allan Poe revealed the apperently intelligent chess-playing machine as a fake.